Hi guys, next tip for editing your own game is creating teams or leagues, a lot of this will also apply to general editing as well. Doing this is pretty straightforward like everything else, but it does take a lot of time, here are the basic tips…
1. Be Organized
I usually set up a few spreadsheets before I start. I have one for general notes & keeping track of things like kits or appearances I have done, I then also create separate spreadsheets for each league I create with a sheet for each team.
2. Use A USB Keyboard
When creating players or editing teams names you will need to do a lot of typing, you can do this using a controller, but if you plug in a USB keyboard you can type this information in much quicker.
These tips will help save time as well as help you keep track of what you have/haven’t done.

Data Packs
Data packs are great for a lot of things like updating transfers, adding new boots or new player appearances, but they do cause some issues. Most things you edit will remain after each data pack but the following will be reset….
So you will keep kits, emblems, names, stats, appearances. What this means is that after every data pack you will need to move players back to the teams you put them in, so for Example if you create Dortmund who have a lot of their players already in the game you will need to transfer them back after each data pack. This is also true for any NT’s where you may have replaced the fake duplicates with the real players.
Personally I wouldn’t bother doing too much other than kits until after the 1st data pack on 29th October. On PS3 there is the import/export team option, you can export any teams you have created (20 at a time) then import them back in after the data pack.
Editing Leagues
There are 3 fake leagues in PES that you can edit to create new leagues, one for Europe, one for America & one for Asia. These leagues are tied to those regions & have 20 teams each, you can change the number of teams to 14, 16 or 18 & the remaining teams will be moved to the “Other Teams” section for that region. It is also possible to move teams already in the game to these leagues, so for example when making the Bundesliga you can swap 3 fake teams for the 3 teams already in the game by going to “Edit League Structure”.
Editing Teams
I won’t go over adding kits or emblems as that is exactly the same as fixing those things for the unlicensed teams. Most the information you need will be on various PES forums or club websites, PES Gaming always has lots of league creation threads, some are better than others but they are all a great starting point. These threads will provide you with kits, formations, stats & appearances, for
Besides forums these sites are also useful for finding player stats…
www.pesmaster.com (Has stats from previous PES games)
www.pesstatsdatabase.com (Has stats for 1000’s of players, although they are a bit overrated).
You can also use other football games to make stats, I always use Football Manager, but you could also use FIFA. The stats aren’t the same between games, but it gives you a good guide if you can’t find them anywhere else.
That’s about it, if you have any questions then post them in the comments & I will help where I can.
On a unrelated note, on 10th/11th October I will again be taking part in Relay For Life, a 24 hour walk for cancer research in memory of my Dad & my Father-in-law. If you can spare any money I would really appreciate any donations here.
Happy editing, Paul.
Game 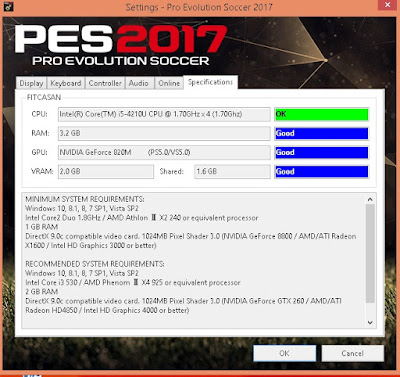